Susan Magdalane Boyle, (born 1 April 1961) is a Scottish singer who came to international attention when she appeared as a contestant on the TV programme Britain’s Got Talent in 2009.

In August 2008, Boyle applied for an audition for the third series of Britain’s Got Talent in ITV and was accepted after a preliminary audition in Glasgow. When Boyle first appeared on Britain’s Got Talent at the city’s Clyde Auditorium, she said that she aspired to become a professional singer “as successful as Elaine Paige”. Boyle sang “I Dreamed a Dream” from Les Misérables in the first round, which was watched by over 10 million viewers when it aired on 11 April 2009. Programme judge Amanda Holden remarked upon the audience’s initially cynical attitude, and the subsequent “biggest wake-up call ever” upon hearing her performance. 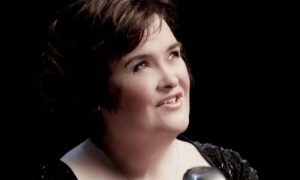 Boyle was “absolutely gob smacked” by the strength of the reaction to her appearance. Afterwards, Paige expressed interest in singing a duet with Boyle, and called her “a role model for everyone who has a dream”. Boyle’s rendition of “I Dreamed a Dream” was credited with causing a surge in ticket sales in the Vancouver production of Les Misérables. Cameron Mackintosh, the producer of the musical, also praised the performance, as “heart-touching, thrilling and uplifting”.

Boyle was one of 40 acts that were put through to the semi-finals. She appeared last on the first semi-final on 24 May 2009, performing “Memory” from the musical Cats. In the public vote, she was the act to receive the highest number of votes to go through to the final. She was the clear favourite to win the final, but ended up in second place to dance troupe Diversity; the UK TV audience was a record of 17.3 million viewers.
The day after the final, Boyle was admitted to The Priory, a private psychiatric clinic in London, Talkback Thames explained, “Following Saturday night’s show, Susan is exhausted and emotionally drained.” Her stay in hospital attracted widespread attention, with Prime Minister Gordon Brown wishing her well.

Britain Got Talent (BGT) authority offered to waive Boyle’s contractual obligation to take part in the BGT live tour. Her family said “she’s been battered non-stop for the last seven weeks and it has taken its toll […but…] her dream is very much alive,” as she had been invited to the Independence Day celebrations at the White House.

Boyle left the clinic three days after her admission and said she would participate in the BGT tour. Despite health concerns, she appeared in 20 of the 24 dates of the tour, and was well received in cities including Aberdeen, Edinburgh, Dublin, Sheffield, Coventry, and Birmingham. The Belfast Telegraph stated that “Despite reports of crumbling under the pressure…, she exuded a confidence resembling that of a veteran who has been performing for years”.

Her first album, I Dreamed a Dream, was released in November 2009 and became the UK’s best-selling debut album of all time, beating the previous record held by Spirit by Leona Lewis. I Dreamed a Dream set a record for biggest first week sales by a debut album, according to the Official Chart Company in the United Kingdom. Topping the Billboard 200 for six weeks, it was the second best-selling album of 2009 in the US. In her first year of fame, Boyle made £5 million with the release of I Dreamed a Dream and its lead-off singles, “I Dreamed a Dream” and “Wild Horses”.

The success was continued with her second album, The Gift (2010), where she became only the third act ever to top both the UK and US album charts twice in the same year, and was followed by Boyle’s third album, Someone to Watch Over Me (debuted at #1 on UK charts, #4 on US charts), released on 31 October 2011. Boyle subsequently released her fourth album Standing Ovation: The Greatest Songs from the Stage (reached #7 in UK, #12 in US) in 2012, her fifth album Home for Christmas (fifth consecutive top ten on UK charts) in 2013, and her sixth album Hope (sixth consecutive top twenty on UK and US charts) in 2014.

As of 2013, she had sold over 19 million albums worldwide and received two Grammy Awards nominations. On 23 July, Boyle performed “Mull of Kintyre” at the Opening Ceremony of the 2014 Commonwealth Games in front of the Queen.